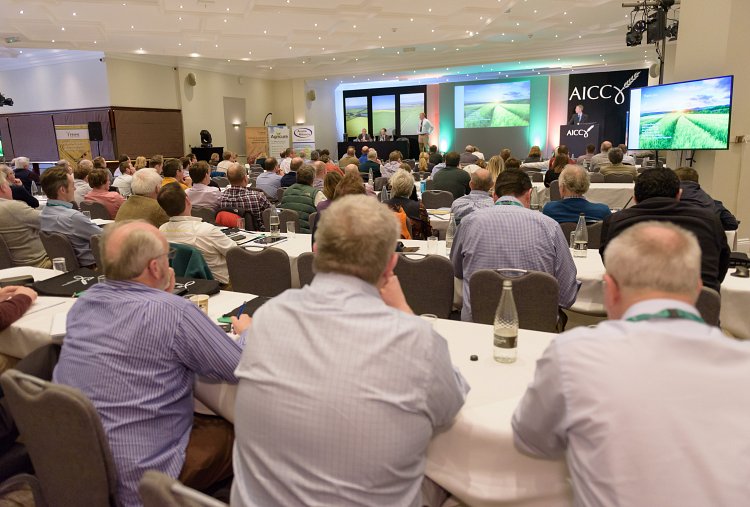 Innovations in product developments and technology alongside access to extensive technical trials provides independent crop consultants with more opportunity than ever was the leading message to come out of the recent Association of Independent Crop Consultants (AICC) Conference at Whittlebury Hall in Towcester.

“Despite the challenges facing the UK arable industry over the next decade, there is no doubt that these are exciting times for the independent agronomy sector whose market share is increasing.  This was reflected in the largest ever attendance at the annual AICC conference from both members and the wider industry,” said Sarah Cowlrick, CEO and manager of the conference.

“As well as the Conference being the largest gathering of independent crop consultants and the wider industry providing unique technical information it also gives members an opportunity to interact and the 42 AICCA (AICC Academy) members the chance to learn from their peers. “

“The light-hearted moments of the conference included asking a member of the AICCA to participate in a pest eating challenge on stage at the dinner!”

“We are a movement, and one that is getting stronger, said chairman Sean Sparling. “As independent crop consultants, we have an ever-changing tool box to work from with some exciting new crop protection products coming to the market in the next five years, as well as innovative crop management tools. “

“Balanced with this we must also look after what we already haves and take seriously the issues of resistance and continue to act responsibly in our recommendations to manage for this – all of which we can do with ease as there is no commercial pressure to use particular products.”

Through our extensive network of nationwide in-house trials, members of the AICC are in the privileged position of really understanding first-hand how these new products work and where they are best placed in a programme for the most profitable crop production, “no one other than AICC members have access to that unique data” he points out.

However, there is much to do for the coming season and much of the advice shared by leading experts at the Conference was focussed on benefits for the spring.

Jonathan Blake of ADAS warned that whilst SDHI fungicides are still active against septoria, there is some evidence of efficacy decline with ¼ and ½ dose applications dropping in the last five years from 90% to 45-60%.

He recommended that to slow down any further drop in efficacy, SDHI’s should only be used where absolutely necessary only using azoles and multi-sites at T1 and T2 where possible, and that there may be scope to refine multi-site use. He reported on trials that showed that when mancozeb and chlorothalonil were used in combination, there was a synergy that could boost disease control and yield in some cases providing 0.3t/ha more than when either multi-site was used in isolation.

Mr Blake pointed out that growing more resistant varieties such as Crusoe showed no significant yield benefit with fungicide programmes incorporating two SDHI’s compared with one.

Neil Paveley, crop protection director at ADAS, emphasised the importance of incorporating resistance management into fungicide programmes. “It is important to make challenging decisions asking if an SDHI is needed at T1, is an azole needed at T3 and consider the addition of a multi-site at T2 and T3.”

Dr Paul Gosling of the AHDB, raised concerns with regards to developing resistance in barley, in line with increasing applications of fungicides. He reminded delegates to use alternative chemistry ie cyprodinil and resistant varieties where possible.

The theme of resistance carried through to pest control as delegates heard from Sacha White of ADAS and Alan Dewar of Dewar Crop Protection, who raised their concerns over available options for effective aphid control due to loss of efficacy of available chemistry due to resistance, loss of actives through regulation and the higher cost of alternative options.

Alan Dewar voiced his concerns over the consequences of a total ban on the use of neonicotinoids, particularly in controlling virus yellows in sugar beet.

“Without neonicotinoids sugar beet growers are fully exposed to full aphid and virus pressure. Virus yellows are a real threat to the profitability of sugar beet. New insecticides are urgently needed and we should also re-introduce the virus yellows warning scheme to guide their usage.”

Better understanding of soil health and biology will ultimately lead to best farm practise and improved crop production was the clear message from Dr Elizabeth Stockdale of NIAB TAG, and Professor Richard Pywell of the Centre for Hydrology and Ecology.

Dr Stockdale urged agronomists and growers to look at how changing management systems such as min or no-till could impact different areas relating to soil and plant health.

She also raised the question of how we should be sampling soils in conservation agriculture systems, pointing out that the current approach is based on traditional conservation cultivation practices.

Professor Pywell focussed on the ways in which biodiversity might support profitable and resilient farming in the future. “Focusing on the challenges around improving soil health we have worked with the RSPB and found that compost addition appeared to be a more effective means of increasing soil organic matter and available phosphorous in the short term (3 years) compared with cover cropping.”

However, we found that when applied over a longer period (10 years) then cover cropping can increase organic matter content and associated diversity of soil fungi, he adds.

“Ultimately growers need to know if creating the right habitats will have a financial benefit to their farm business and this is a question that we asked in a 6-year project on a 1000 ha commercial farm. Some of the poorer land was taken out of production and used to create habitats for beneficial species. The results were encouraging with reported yields of some crops up by as much as 35%.”

Asking for collaboration from the farming industry to work with the NERC and BBSRC on the Assist project, a £11 million research programme (https://www.ceh.ac.uk/our-science/projects/ASSIST) Professor Pywell pointed out that this was an opportunity for growers to influence innovative farming systems of the future.

Reporting on instances of rye grass resistance to glyphosate in Australia, Dr Paul Neve of Rothamsted Research pointed out that there are no known reasons why black-grass in the UK would not follow the same path.

“There is some evidence that some populations of black-grass are evolving reduced sensitivity to glyphosate, and this is down to several factors. Glyphosate use has consistently risen on UK farms, whilst at the same time widespread resistance to post-emergence herbicides is putting pressure on glyphosate as rare glyphosate survivors are not controlled by post-ems.”

“Reductions in tillage also increase the probability that rare survivors will persist, whilst later and multiple applications of glyphosate increase the proportion of the population that is exposed to glyphosate.”

“Prevent survivors, maximise efficacy, use alternatives and monitor success,” is her advice.

Barrie Hunt, technical development manager for Monsanto, acknowledged the work that the industry had done in lobbying for the re-authorisation of glyphosate. However, he re-iterated the importance of managing for resistance and keeping to the best practise guidelines reminding delegates that ‘eradication of resistance once detected is not possible.’

With current trends towards higher seed rates and either early or late drilling to combat pest and disease pressure in OSR crops, Dr Pete Berry presented trials data re-enforcing the message that the optimum seed rate for hybrids and conventional varieties is 25-40 plants/m2, with some seasonal influence.

“In order to maximise the crops potential to photosynthesise through flowering, when seeds are set, the canopy needs to be relatively open at flowering. “

He also pointed out that the effects of sowing date on yield were not well documented, highlighting that there was little impact on yield for crops drilled from mi –August to mid-September, after which there is usually a yield decrease, again depending on the season.

Dr Berry encouraged delegates to look at the Oilseeds YEN project for the valuable learnings about characteristics and management of high yielding OSR crops.